Make the most of Svalbard in 4 days 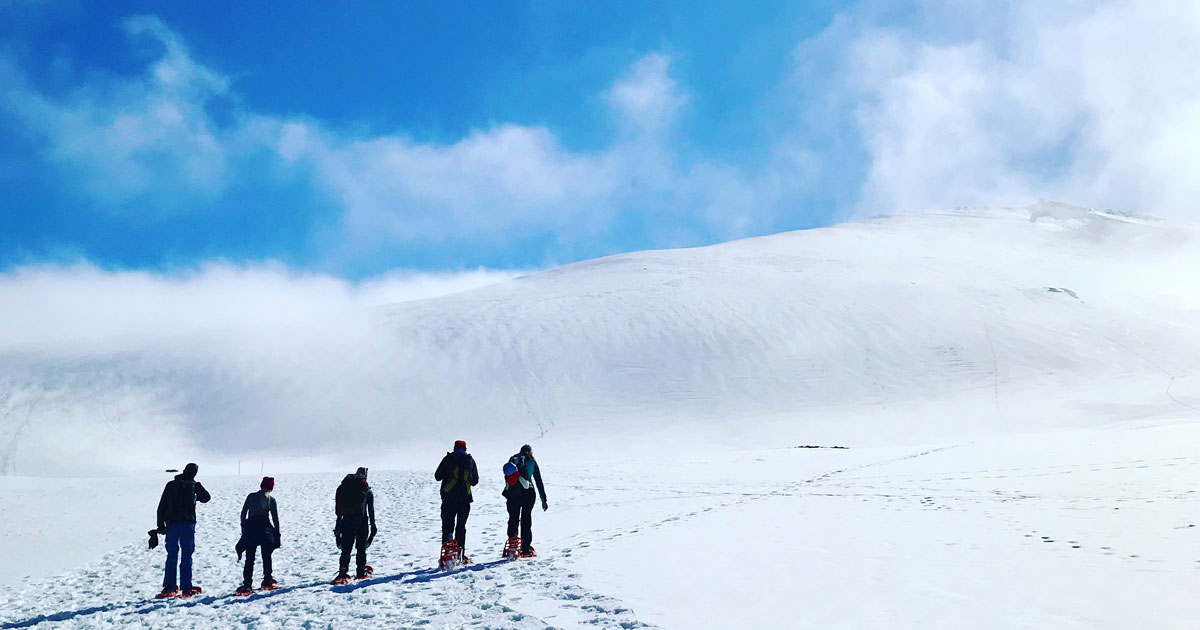 Have you ever wanted to go to the Arctic Circle? It’s easy, if you don’t think that’s true, check out this video from Tom Scott on how to visit Svalbard.

Despite the sound of the words “Arctic Circle”, it’s not nearly as remote as you might think. It is sparsely populated though, and the only “city” there, Longyearbyen, houses a small population of roughly 2000.

It was settled when mining was a big source of income in the area and it is becoming a more popular tourist destination. They have some bars that wouldn’t look out of place in Shoreditch (London) and AirBnBs and fast WiFi (mainly because of the research also done there).

Speaking of AirBnBs, I’d recommend going for these. There are a few hotels but they are a lot more expensive.

Prepare for the weather! This article is for a June holiday, so around the city itself there isn’t much snow, but as soon as you leave the town you’ll see endless snow and glaciers, so wrap up warm. Also, June is in the “summer sun” season where the sun stays high in the sky for 24 hours a day. As fun as this is this can be disorienting, so make sure you try and sleep at a regular-ish time (the bars close at 2 am so there’s not much to do after this anyway).

Note: If you’re going in the winter months, there is pure darkness for 24 hours a day.

Also alcohol. There is one shop in the city center that sells alcohol (apart from bars) and you have to show your boarding pass each time you want to buy any. There is a limit too (even for residents), due to the extreme weather and sun cycles causing people to tend towards more extreme behaviour.

If you’re worried about polar bears, don’t be, they are very rarely seen near the city, but if you go out of town you are required by law to be in a party with someone carrying a weapon, so only go with guides or residents.

As for the activities below, you’ll want to book them well in advance, Visit Svalbard is recommended as a one-stop place to book everything you need. 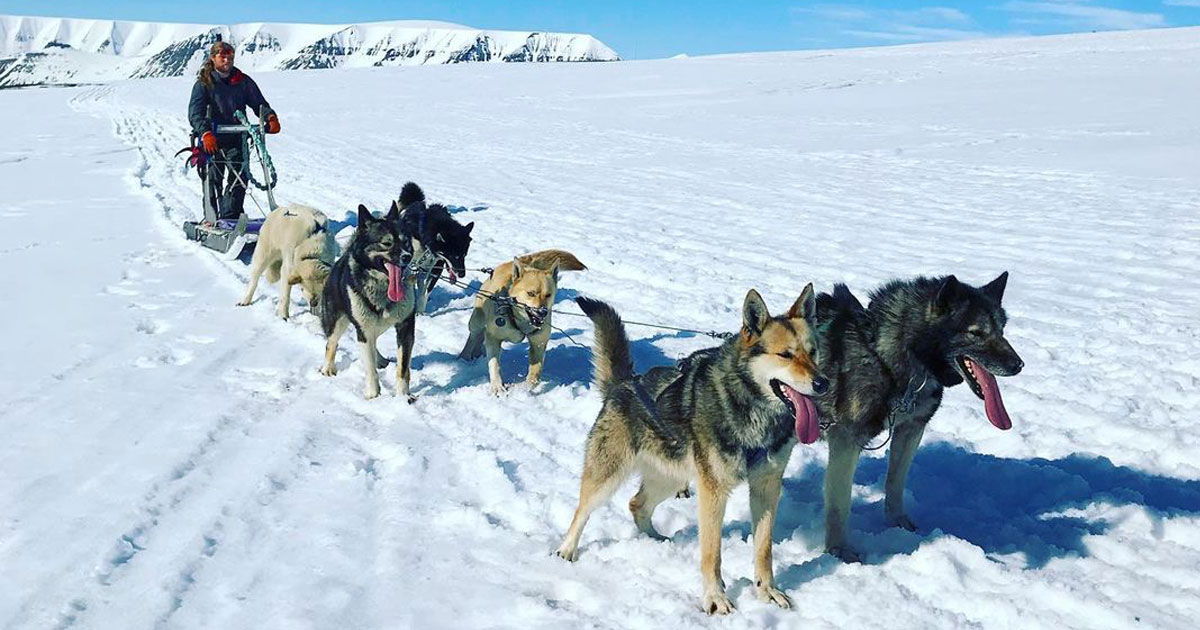 So you’ve just landed? You’ll arrive at a tiny airport, aptly named Svalbard Airport and you’ll have a short coach trip to the city center. But first, take a look at your surroundings! You probably haven’t been to the Arctic Circle before so take in as much as you can; you’re in the northernmost capital of the world!

The coach is taken just outside the airport and arrives quite frequently. You’ll pay onboard so sit back and enjoy the ride.

Once you get off the coach take note of the huge metal polar bear sculpture, it’s really impressive!

If check-in is open at your hotel or Airbnb it’s suggested you go there, drop your bags, freshen up and get ready to start your adventure, with the first thing being husky sledding!

A lot of people say save the best for last, but why? Husky sledding will be one of the best experiences you’ll ever have.

You’ll get picked up by a car and driven about 30mins to a remote kennel complex. Here you’ll be given a warm boiler suit, boots and a hi-vis jacket to wear. After this you get to go into the kennels are play with the huskies for a while, they are all super friendly and super energetic (you’ve been warned).

Note: The large kennels may seem cruel to some but the handlers assure that they care for the dogs greatly and even live on-site in case anything happens. They are much happier here than living in warm climates or city apartments.

After a while, the handlers will pick out a few dogs to take on the ride. There are six huskies per sled and there may be about 5 sleds in total.

You now will get the fun and surprisingly hard task of harnessing the dogs. They are incredibly energetic and won’t sit still, especially now they’ve seen the vast plains of snow! They are also quite strong too, however if you need help the handlers will be around.

After they are successfully tied to the sleds and you’ve learned how to control the sleds, you’ll be off! Gliding through the snow and glaciers. You’ll be on the sleds in pairs and will take turns after a break halfway through.

Enjoy the scenery, it is absolutely breathtaking and has largely been untouched by humans.

In what will feel like too short a time, you’ll be back at the kennels for some complimentary biscuits, and drinks (alcoholic too!) and be taken back to town.

Take this moment to get some food and drinks! Drop into Svalbar, which is a pub on the main high street of Longyearbyen and would fit in any modern capital city. They serve great food and draught or bottled beer.

Now it is time to have a walk around and explore Longyearbyen, if you stay in Svalbar till late, the sun will still be sky high so there’s no need to worry about it getting dark. Walk up to the lake past the docks and see the polar bear warning sign.

After which it is probably time to get some sleep! 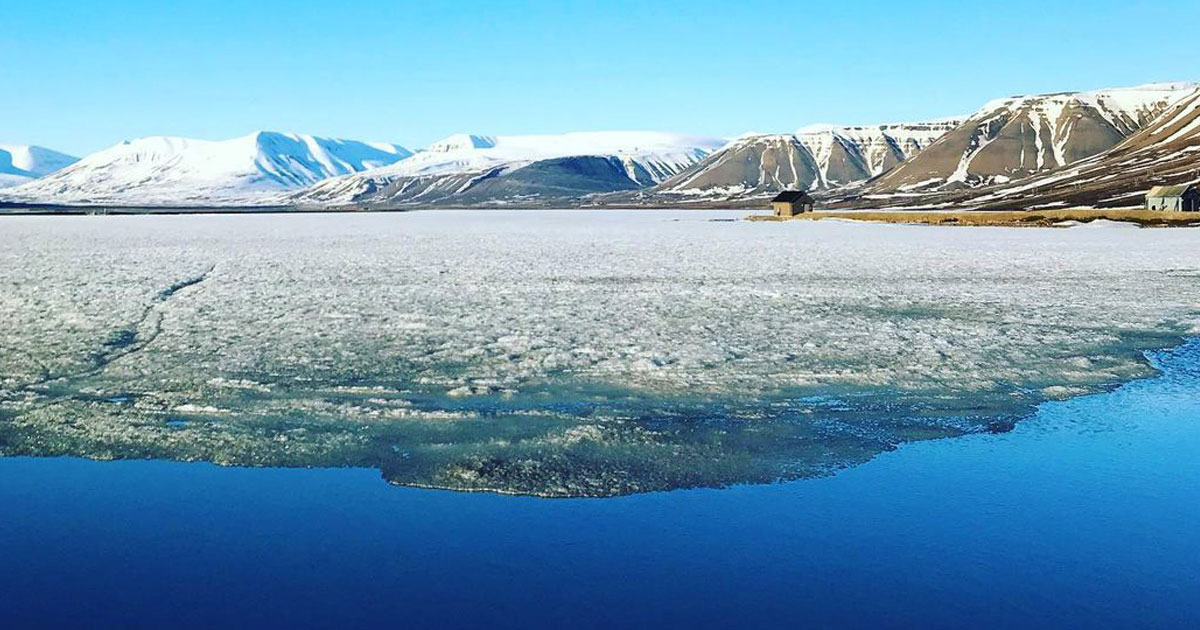 You’ll start off the day, quite early in fact, on a walking tour from a local guide. You’ll get to see a lot more of Longyearbyen and learn some interesting facts, features, a lot of history. Also some more sobering facts about climate change and the current effect it’s having on wildlife in the area, especially polar bears, and also for residents.

You’ll hear how a very small increase in temperate can cause permafrost to start defrosting and how this has caused a landslide in recent years. Hopefully, you’ll also spot some arctic animals on your walk!

The mining history is very interesting, and how this gave birth to Longyearbyen, the second largest town of Barentsburg, and also the abandoned nearby Russian town of Pyramiden.

Again this is also a great opportunity for some photography, especially the view from the Svalbard Church.

Next up is a whale safari. You’ll go down to the dock, board a ship, and be given some boiler suits similar to the sledding. From then on you’ll sail quite far north in search of belugas and humpback whales. These are not always visible so don’t be too disappointed if you don’t see one, but the feeling of being on a ship this far north is still an incredible one. There are probably fewer than 100 people on the planet as far north as you are at this point!

You’ll soon get some food from a lower deck and then slowly return back to the Longyearbyen dock.

Your final stop for the day is the Karlsberger Pub. Found on the main street, this pub looks amazing with bottles lining the entire bar. It is quite small but then so is the town so go in for a drink and see where the night takes you. 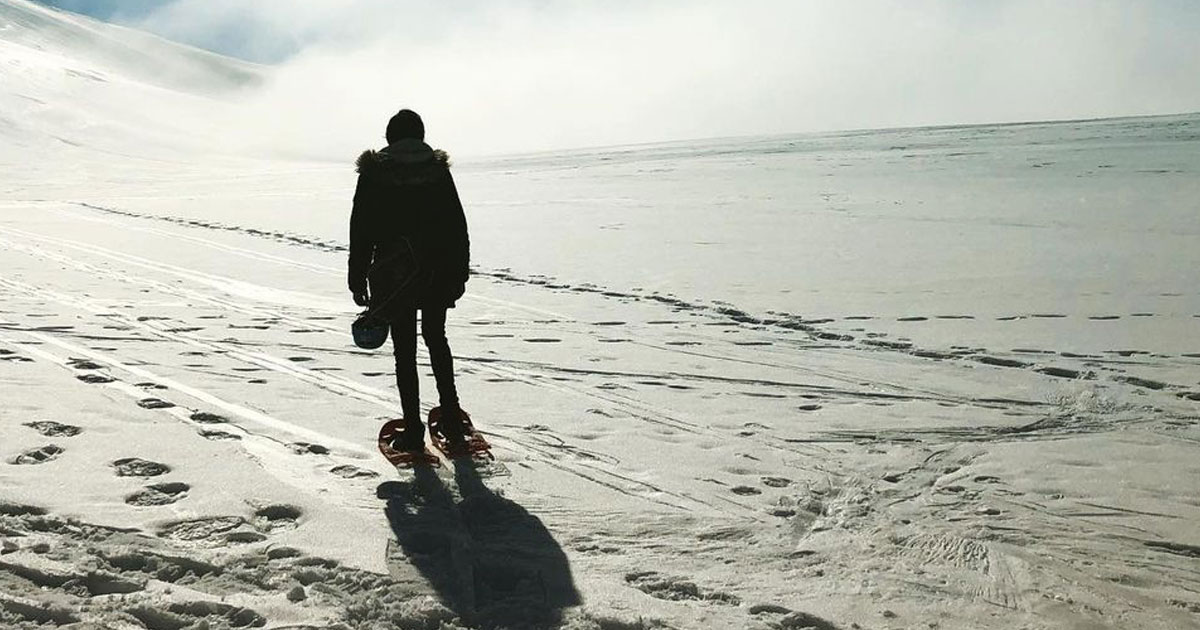 It’s another early start today, this time for a Grotto tour. Whilst this may sound like some Christmas-themed nonsense, it’s actually an amazing excursion into an ice cave.

After putting on some shoes which resemble tennis rackets, you’ll head out for a walk up a glacier. This isn’t the easiest walk in the world and involves some scrambling so make sure you’re of relatively decent fitness.

The vast snow plains are an amazing sight to behold though, it’ll feel like another world.

Once you arrive at the entrance to the ice cave, you’ll be given a little drink and descend down. It initially looks just like a hole in the ground, but as you go through another world reveals itself. Everything around is just pure ice and it is truly beautiful with all the colours and shapes.

This is probably the slippiest place in the world though so walk carefully!

After a fair bit of descent, it’ll be time to turn back as any further and it’s impossible to get out without extra equipment.

Next up is a brewery visit. Yes, Longyearbyen has its own brewery! They produce the Spitsbergen brand of beers and some of the water comes from 2000 years old glaciers!

It’s a small affair at the moment, with only three tanks but they plan to expand and have some deals with Nordic airlines too. You’ll get to sample a fair few types of beer here and also buy some souvenir glasses and t-shirts.

After all that walking and beer tasting, you deserve some great food. Head over to Mary-Ann’s Polarrigg, which is a quirky looking hotel with a great restaurant attached to it, full of plants and greenery, with floor to ceiling windows so you can admire the view.

This may be controversial for some but they do serve whale and seal steaks here, which is something that is worth experiencing once.

Afterwards, head back to one of the bars and enjoy your last night in Svalbard. 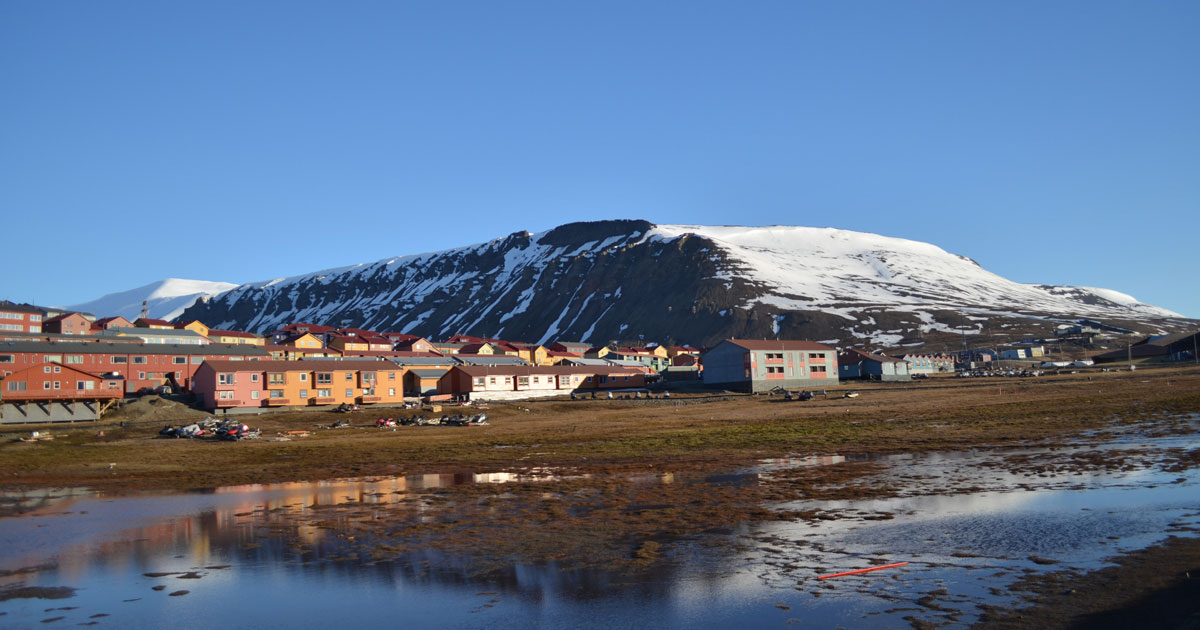 First up today is a Scenic photo tour from a local. This is a car-based tour so there isn’t as much walking and also it means you can go much further out than the walking tour a few days ago.

You’ll still get a lot of history and a background of everywhere you go, but the emphasis is on some great views and visiting some landmarks that are not within walking distance.

One of the main landmarks you’ll see is the famous Seed Vault. It is a long-term seed storage facility, built to withstand any challenge, either natural or man-made disasters. You’ll also see some Arctic Terns, hopefully, some Arctic Foxes, and more of a close up of some mine shafts that the Nazis blew up during World War II.

Your final trip in Svalbard is a hike up Plateau mountain, which is a relatively long snowy hike up to the top of a mountain where you will be given some amazing views of Longyearbyen. If you want a really fun (but wet way down), you can slide down the first half of the mountain till it starts to get rocky!

Hopefully, you’ve had an amazing time in Svalbard. It’s a trip you’ll remember forever and you’ve probably gone further north than most people in the world. As mentioned earlier, if you want to book any of the afforementioned activities Visit Svalbard is recommended as the one-stop place to book everything you need. Also flights to Oslo or Tromsø are readily available. Hopefully this guide has been some help to you too, thanks for reading!